- An interesting edit of the day's rehearsals and performances shot and edited by Krisztian Hofstadter.

'Semaphore' works between dance, music and text. It is a collaboration between the choreographer Jane Turner, the poet and writer Philip Terry and the musician, composer and technologist Richard Hoadley.

The primary focus is on live processes, data from the dancers' movements are used to trigger and modulate text, audio and music notation. This is in turn performed and in some cases fed back to the dancers whose movements are then influenced by the music and text, and so on. Ideally, there is a balance between gesture, whether based on movement, music or text and the resulting translation that is not too trivial but is also not so remote that the origin and its result do not feel connected at all. 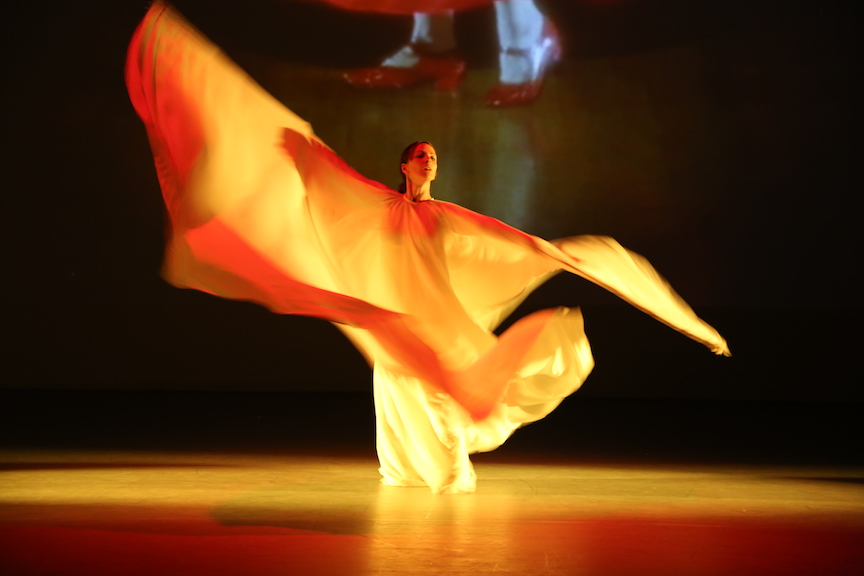 Steve Mithen's Prehistory of the Mind suggests that it is natural for the human imagination to think creatively across domains: people can choose to imagine music that accompanies actions, although how this happens is not understood technically. There is evidence that cross-domain thinking is at the heart of creative activity; this practice-based research investigates this hypothesis.

There has been significant research into efficacious methods of mapping one circumstance onto another, and more recently, the idea of mapping and its aesthetic value itself has itself become the focus of investigation.

Increasingly, as a result, researchers and performers have been investigating the counter-intuitive idea of more less predictable forms of mapping (a reaction to the phenomenon of 'mickey mousing'), where neither performer nor coder/composer are aware of the full repercussions of their behaviours. The effect of certain actions on the predictability and purpose of systems and structures of performance, including the performers' intentionality and virtuosity, is fundamental to this research.

Video of a performance of Quantum Canticorum at the Museum of Modern Art in Barcelona, showing the relationship between movement and notation

The complexity of these investigations can make it seem as though research into any further attempted integration of expressive domains should pause until we are clearer about the current situation. This assumes, though, that the idea of static mapping structures for each new interface, perhaps imitating acoustic musical instruments, is a feasible, practical and aesthetically desirable goal. Composers, performers and researchers are now investigating 'composable environments' where the aesthetic goal is the production of rewarding, stimulating and challenging compositions and environments rather than tool-like new interfaces.

This project also presents practice-led research implementing and investigating these ideas and issues. It charts the development of live work in dance/movement, music/audio and music notation and in addition considers the challenges arising from the semantic structures inherent in text.